General information about the project

Relevance of the study

The aim of the study

2. A mathematical model of the tomography problem based on geochemical data based on the representations of statistical physics has been developed. The developed methods of numerical realization of inverse problems of mathematical geophysics and geochemistry have shown satisfactory accuracy on test examples. 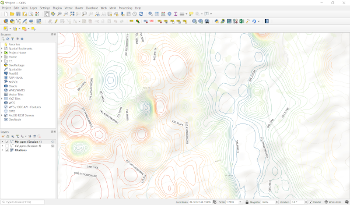 4. A software module has been developed for the QGIS system version 3.18.3-Zurich, the functioning of which is based on the application of the theory of inverse problems of mathematical geophysics using geological data on the earth's surface, geophysical measurements and geochemical analyses as input data. The software module is based on a complex predictive-mineragenic model consisting of geochemical and geophysical parts and digital modeling by methods of inverse problems of geochemistry and geophysics, which is aimed at the regional geological study of the subsurface, namely the deep parts of the Earth's crust.

The software module provides users of the QGIS system with a set of methods for reconstructing the distribution fields of chemical elements at a given depth based on mathematical modeling, and has the following functionality:

a) Import of measurement input data from CSV format files into the database;

b) Carrying out predictive calculations based on the input measurement data and the algorithm for solving the inverse problem;

c) Visualization of the initial data and data obtained as a result of solving the inverse problem. 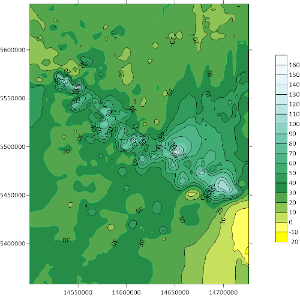 5. The numerical data were processed and analyzed using the above mathematical methods and a set of application programs. The data were obtained in the engineering laboratory during analytical studies of ICP-MS spectroscopy, 777 samples taken on 70 chemical elements in the surveyed area of over 40 thousand square kilometers, which were obtained in expeditionary studies on geochemistry and mineralogy of loose deposits of mineral deposits of the Rudny Altai and Kalba.